Hinduism as a religion is many-sided yet bound by a common search for Truth and to Hindus it means a way of life and a fellowship of faiths. With the advent of the Aryans, it originated as a simple form of worship of the forces of Nature, drawing in its system action in social organisations, local cults, deities’ diverse beliefs and modes of worship.

Nag-Panchami is an important all-India festival and is celebrated on the fifth day of the moonlit-fortnight in the month of Shravan (July /August). This is the time when serpents invariably come out of their holes that get inundated with rain-water to seek shelter in gardens and many times in houses. As such they pose a great danger to man.

May be therefore, snakes are worshiped on this day. Right from the times when mankind started acquiring some sort of culture, Sun and Snake have been invoked with prayers and ritual worship in most of the countries. In India even before the Vedic times, the tradition of snake-worship was in vogue.

In ancient India, there lived a clan by the name of "NAGAS" whose culture was highly developed. The Indus Valley civilisation of 3000 B.C. gives ample proof of the popularity of snake-worship amongst the Nagas, whose culture was fairly wide-spread in India even before the Aryans came. After the Naga culture got incorporated into Hinduism, the Indo-Aryans themselves accepted many of the snake deities of the Nagas in their pantheon and some of them even enjoyed a pride of place in the Puranic Hinduism.

The prominent Cobra snakes mentioned in the Puranas are Anant, Vasuki, Shesh, Padma, Kanwal, Karkotak, Kalia, Aswatar, Takshak, Sankhpal, Dhritarashtra and Pingal. Some historians state that these were not snakes but Naga Kings of various regions with immerse power.

The thousand-headed Shesh Nag who symbolises Eternity is the couch of Lord Vishnu. It is on this couch that the Lord reclines between the time of the dissolution of one Universe and creation of another. Hindus believe in the immortality of the snake because of its habit of sloughing its skin. As such Eternity in Hinduism is often represented by a serpent eating its own tail.

In Jainism and Buddhism snake is regarded as sacred having divine qualities. It is believed that a Cobra snake saved the life of Buddha and another protected the Jain Muni Parshwanath. To-day as an evidence of this belief, we find a huge serpent carved above the head of the statue of Muni Parshwanath. In medieval India figures of snakes were carved or painted on the walls of many Hindu temples. In the carves at Ajanta images of the rituals of snake worship are found. Kautilya, in his "Arthashastra" has given detailed description of the cobra snakes.

Fascinating, frightening, sleek and virtually death-less, the cobra snake has always held a peculiar charm of its own since the time when man and snake confronted each other. As the cobra unfolded its qualities, extra-ordinary legends grew around it enveloping it in the garble of divinity. Most of these legends are in relation with Lord Vishnu, Shiv and Subramanyam.

The most popular legend is about Lord Krishna when he was just a young boy. When playing the game of throwing the ball with his cowherd friends, the legend goes to tell how the ball fell into Yamuna River and how Krishna vanquished Kalia Serpent and saved the people from drinking the poisonous water by forcing Kalia to go away. 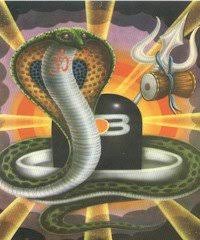 It is an age-old religious belief that serpents are loved and blessed by Lord Shiv. May be therefore, he always wears them as ornamentation around his neck. Most of the festivals that fall in the month of Shravan are celebrated in honour of Lord Shiv, whose blessings are sought by devotees, and along with the Lord, snakes are also worshiped. Particularly on the Nag-Panchami day live cobras or their pictures are revered and religious rights are performed to seek their good will. To seek immunity from snake bites, they are bathed with milk, haldi-kumkum is sprinkled on their heads and milk and rice are offered as "naivedya". The Brahmin who is called to do the religious ritual is given "dakshina" in silver or gold coins some times, even a cow is given away as gift.
Posted by Prathima P